Sparkling with color, architecture and planned development is the vibrant city-state of Singapore. It is a clash of cultures which maintains traditions from old countries yet is a blending of a new people. The skyline looks planned with artistic strokes as the flow of new buildings blend with the old and revitalized.

This city is an expensive place to visit and to live. Apartments can easily cost four to five times more than back home. People work hard here. Many have more than one job to get ahead.

This society holds itself to higher standards and expectations for its citizens. It appears that there is also a higher quality of life and freedom from much of the crime that has become commonplace in other western societies.

The history of this area was a difficult one. We again see the players from the explorer nations that we have seen before on this world tour…..Portugal and England were here early on until the Dutch captured the Malay region in the seventeen century. Then a hundred and seventy-eight years later Britain decides to “join the party” again.

To completely simplify history, Raffles, from Great Britain, thought this would be a great place for a port. Not wanting to lose this opportunity due to slow “snail mail” post he made “arrangements” to take the land for Britain’s gain.

The Dutch were already here and their “guy on the ground” wrote a letter to leaders in Great Britain since Raffles “take over” was not gentlemanly. Which could be interpreted more than a century later as, ‘We were here to exploit these people and this natural resource first, it’s not fair what “your guy did” and you need to get Raffles in line.’

Great Britain was not happy with Raffles for acting without authority but in the long run agreed that it was a land worth keeping. So the heads of these two European nations decided to split a land, that was not really theirs, in two….Britain kept the island which became Singapore while the Dutch received what is now Malaysia. I think to myself in a sarcastic tone, ‘Now I understand why Malaysia is divided in such a strange way on the map’….Colonial Involvement.

Raffles did create a economic powerhouse but the indigenous people were treated little better than slaves with limited ways for advancement. Immigrants came from other countries. Among these many came from China. The Chinese risked execution by fleeing their country in search of a better life. Walking through the historical museum in Chinatown I wonder if they thought it was better after they spent a few years here.

Also interesting is that the early infrastructure of the country was built by convicts from India. Other immigrants also relocated, such as women from Japan, but in the end life was hard and the poor lived in filth and poverty.

After World War II and the Japanese Occupation, the island finally achieved independence and grew into the society that now appears in all its harmony and glory.

The museums here do a very good job of relaying the history, culture and personal stories of those who lived here. I especially liked how the museums give voice to both the indigenous and immigrant, rich and poor; Telling both sides and painting a more complete picture of the island’s past.

I spent hours in the museums here and I was grateful for the lessons learned. In fact, I had to return a second day to the National Museum of Singapore as the two hours I had originally allocated was not enough time before this museum closed for the day. The museums here helped to continue to paint the picture of the larger interconnecting world history which we all are apart.

Other high points during my time here included, walking around Fort Canning Park, Chinatown and by the river at the trendy Clarke Quay, observing Chinese New Year celebrations and attending mass at St. Andrew’s (Anglican) Cathedral, which has a packed Sunday service almost every hour on the hour. I must admit that I also enjoyed having another shot at beating my new friends from the Komodo Island boat trip at Gin Rummy even though I lost again. And yes….I did get to the Long Bar at Ruffles Hotels to sample their famous drink (Singapore Sling) and eat a few peanuts while dropping the shells on the floor.

I sit back and watch the bartender who can barely keep up with the drink order everyone is here to sample. We have stepped back into time. The bar has been restored to it’s nineteenth century nostalgia. The teak wood shelving behind the bar is organized neatly with glasses and liquor bottles. A spiral wooden staircase rises in the middle of the room. On the ceiling, palm woven fans move back and forth to create a slight breeze.

Waiters wearing pinstriped shirts and golden ties scurry from table to table to take drink orders as strangers share stories and discuss the politics of the day. As I leave, I can say with certainty that Hemingway always did find the best places to kick back and relax while he was not writing. Check out the photos, or better yet come and visit yourself, and then tell me…..Wouldn’t you agree? 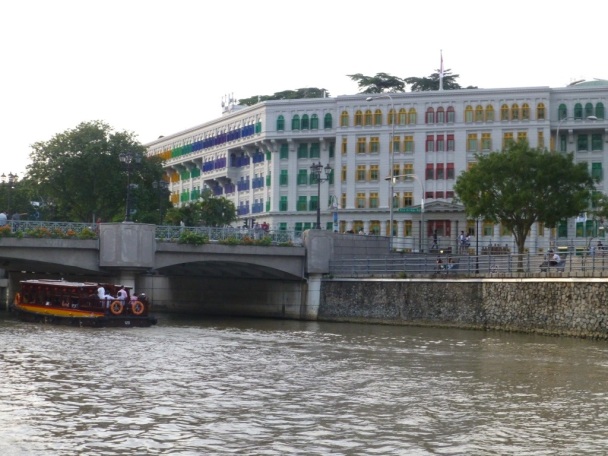 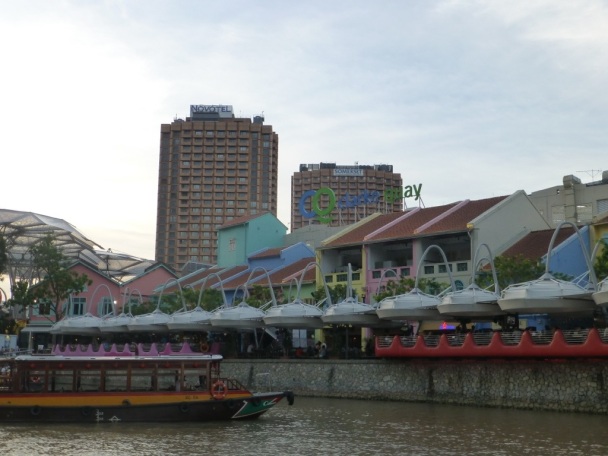 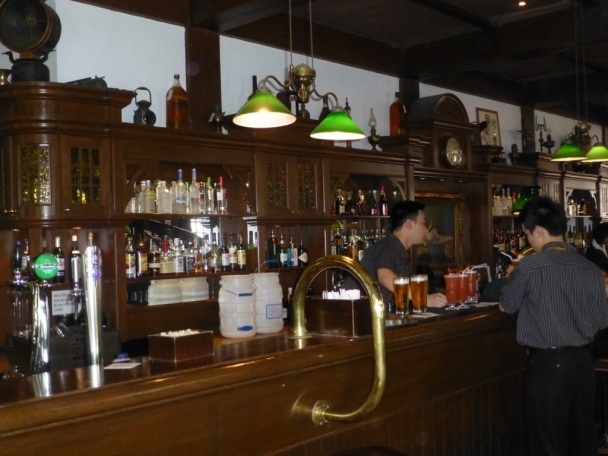 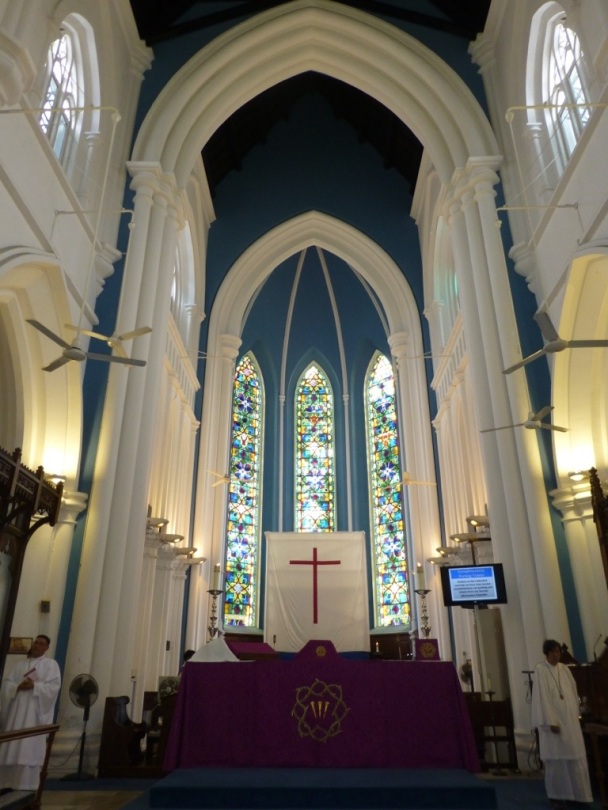